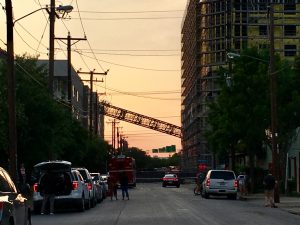 Many people in the 468 apartments in Elan City Lights near downtown Dallas were at home folding laundry, doing chores, relaxing with friends, and other things people do on Sunday afternoons.

Then a huge storm blew through Dallas. Residents heard a giant crash many thought was a tornado. Instead it was an enormous construction crane slicing through the five-level complex and parking garage.

It sounds like a scene from a novel or a horror movie. To these people, it’s very real, and will affect them for a lifetime.

One young woman lost her life, and two remain in critical condition in an area hospital. The lucky ones had seconds to grab their pets and loves ones and run. They dashed into the torrential storm in underwear, covered in blood, barefoot on shattered glass trying to help their neighbors. Cars toppled off the parking garage making it look like a war zone. One man was trapped in his car that dangled off the side of the building until neighbors helped him out a window.

After the storm, residents were given 90 seconds to five minutes to grab things from their homes. Now they’re not allowed in at all. The building has been deemed unstable. It may be six months before they can get their cars and other things—if their belongings are still there. The apartment management company (which also owns the building under construction) has provided $100 per day for hotels for a week, $500, plus refund of last month’s rent. Residents are required to have renters’ insurance, but there are deductibles and delays. And can you rattle off everything you own to an insurance adjuster? A resident field the first lawsuit against the crane company and the apartment management already.

People in Dallas have kind hearts. On Sunday, Omni hotels provided hotel rooms, Urban Paws took in pets, and restaurants and private citizens provided food. Other businesses are opening their doors for donations—pet supplies, clothing, toiletries, furniture, shoes, socks, makeup, underwear. Shout out to @JackMasonBrand, @CENTRL_Office, @rentmtwardrobeapp, and especially @Dallas_Iron_Fitness for taking in these items. There are also a number of GoFundMe campaigns. If you’d like to give, search on “dallas crane site:gofundme.com” to see the options. Their needs won’t stop this week.

Remember what you were doing at 2 p.m. last Sunday. The building is down the street, so I drive by it often. The now ghost town will always remind me of that spring Sunday afternoon that was so abruptly interrupted for these people.