Cybercrime doesn’t talk. It creeps in and destroys lives right under my nose when a cryptojacking scheme lands my boss, Pinkie, in jail. I had just started over with a new career, boyfriend, and confidence after escaping a vicious murder investigation that shattered my ability to trust. Then Pinkie’s arrest leaves me struggling to run his two bars while also unraveling the conspiracy.

I won’t let my mentor and friend go down for something he didn’t do. Neither will Jon, the most talented musician on the bar’s stage and the perfect boyfriend…until his good fortune sends me reeling. Now I have to force myself to trust the cops, people who hurt me, and known criminals. Will it be enough to free Pinkie and save my life? listen to chapter one

A portion of the author proceeds will go to Hope’s Door New Beginning Center to help fight domestic abuse. Dark Energy is published by Tirgearr Publishing. 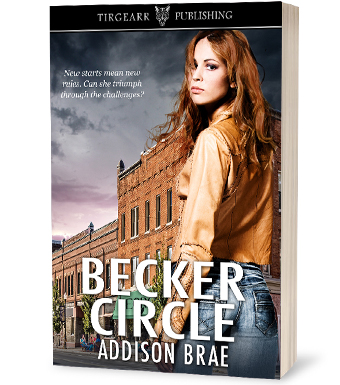 My first and only boyfriend believed I was too gutless to leave. He was dead wrong. My name’s Gillian, and I graduated Harvard early and left his hot temper and everyone else behind for Dallas. Determined to make it on my own, I land a second job bartending at the neighborhood pub smack in drama central where most every jerk in the neighborhood hits on me—at a huge price.

A week into the job, the neighborhood’s very popular drug dealer falls to his death a few feet from the table I’m serving. The cops say suicide, but the hot guitar player in the house band and I suspect foul play, and I intend to prove it. We dig deeper, grow closer, and make a shocking discovery. We know the murderer. Watch the trailer. Listen to the first chapter read by the author.

A portion of the author proceeds will go to Hope’s Door New Beginning Center to help fight domestic abuse. Becker Circle is published by Tirgearr Publishing.